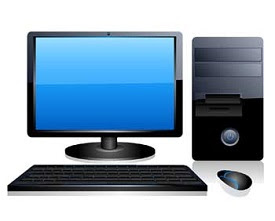 here are some funny computer facts which you will find interesting! All those are compiled from web and books.

2. 220 million tons of old computers and other technological hardware are trashed in the United States each year.

3. The first two video games copyrighted in the U.S. were Asteroids and Lunar Lander in 1980.

5. U.S. President Bill Clinton’s inauguration in January 1997 was the first to be webcast.


6. Google uses an estimated 15 billion kWh of electricity per year, more than most countries. However, google generates a lot of their own power with their solar panels.


8. Did you know hows was Bill Gates’ house was designed? Using a Macintosh computer.


9. About 1.8 billion people connect to the Internet, only 450 million of them speak English.


10. By the end of year 2012, there will be total approximately 17 billion devices (which includes computers, tablets and mobile) connected to the Internet.

11. Every month, domain names are being registered at a rate of more than one million!


12. Did you know that Email was already around before the World Wide Web came?


14. MySpace reports over 110 million registered users. Were it a country, it would be the tenth largest, just behind Mexico.


17. The average computer user blinks 7 times a minute, less than half the normal rate of 20.


18. The first banner advertise was introduced in the year 1994.


19. Doug Engelbart had made the first computer mouse in 1964, and it was made out of wood.


20. The first domain name ever registered was Symbolics.com.


21. The world’s first computer which was named the Z1, was invented by Konrad Zuse in 1936. His next invention, the Z2 was finished in 1939 and was the first fully functioning electro-mechanical computer.


24. While it took the radio 38 years, and the television a short 13 years, it took the World Wide Web only 4 years to reach 50 million users.


25. 70% of virus writers work under contract for organized crime syndicates.


26. A program named “Rother J” was the first computer virus to come into sight “in the wild” — that is, outside the single computer or lab where it was created.


28. Sweden has the highest percentage of internet users, they are 75%.


28. Mosaic was the first popular web browser which was released in 1993.

29. Every minute, 10 hours of videos are uploaded on YouTube.

31. 70% of virus writers actually work under a contract for an organization.